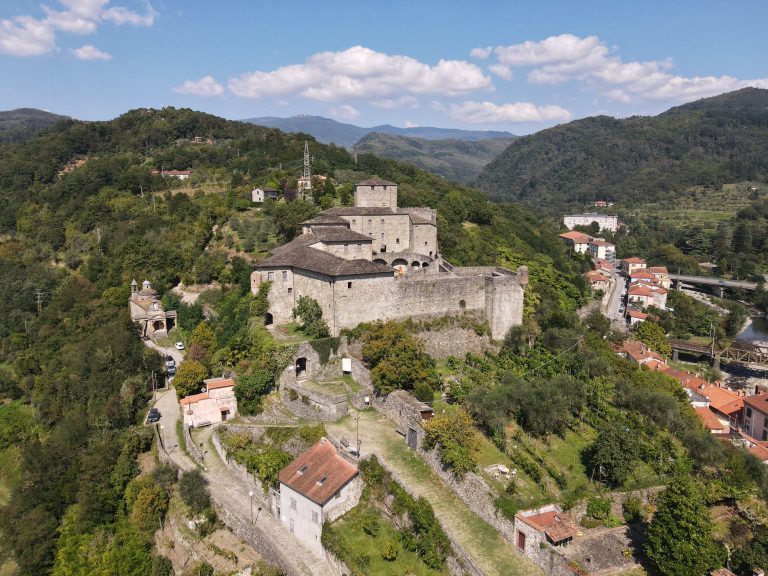 The Piagnaro Castle is a fortress built in the strategic point to protect the Apennine passes and around which the first medieval nucleus was formed, built around the year 1000. For centuries it represented an integral part of the defensive system of the city. This important fortification has been home to the fascinating Museum of Stele Statues since 1975.

It is likely that the first fortification erected was a simple tower, dating back to the first half of the 10th century. In its millenary history it has undergone numerous destructions and subsequent reconstructions that have brought it to its current appearance. The Castle maintained its military function until the end of the 18th century.

The Piagnaro Castle dominates the town of Pontremoli from above. Its strategic position: at the point where Via di Monte Bardone ascends towards the Cisa Pass. From its walls you can view the entire town and the two rivers that cross Pontremoli: the Verde and the Magra. Its name derives from the “piagne”, sandstone slabs taken from local quarries with a characteristic gray color, which have always and still today, cover the roof of the Castle. The first document bearing his name “Planele” dates back to 1262.

The architectural system is the result of several building phases carried out in different eras: you can admire Gothic windows dating back to the fourteenth century in the seat of the Governor, dated around 1435 and rebuilt by Niccolò Piccinino, the central body that was the seat of the barracks up to the middle of the 19th century, up to the stands of the 18th century. The Piagnaro Castle went through conditions of severe degradation, but its recovery began when it was decided to use a part of it for the construction of the Lunigiana Stele Statues Museum.
The visit to the Piagnaro Castle also includes a visit to the Museum of the Stele Statues.

Where the Piagnaro Castle is located

The Piagnaro Castle is located on the highest part of the ancient village of the town of Pontremoli .

How to get there

It can be reached on foot through the medieval village and following the signs for “Castello”, park in the free parking lot in the “I Chiosi” area, cross the Ponte della Cresa on foot and follow the road to the end, immediately afterwards turn left and follow the directions. Another way to reach it is to park the car in the “Porta Parma” area, near the hospital, take the lift that leads directly to Castello del Piagnaro.

How to visit it

The Castle is open every day throughout the year, we recommend that you visit the museum website where you will find the opening hours updated in real time.
THE CASTLE AND THE MUSEUM ARE FREE FROM ARCHITECTURAL BARRIERS, EASY TO VISIT EVEN FOR PEOPLE WITH DISABILITIES.

Find nearby
The medieval village of Borgo di Pontremoli, the Villa Dosi Delfini, the Pavesi Ruschi-Noceti Palace, the Dosi-Magnavacca Palace, the Strait of Giaredo.

Thanks to the guides of Sigeric for the text of the Piagnaro Castle.

Texts, videos and images are the property of Lunigiana World, even partial reproduction of the contents on the site without request is prohibited.